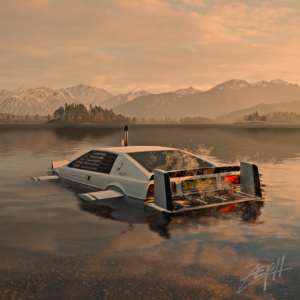 It is my conviction that all of us who ever saw the 1977 James Bond film “The spy who loved me” were fascinated by “Wet Nellie,” Bond’s (Roger Moore) Lotus Esprit S1 sportscar able to transform into a submarine. And subsequently we fantasized about Bond using the Lotus not only in the Mediterranean near Sardinia, but elsewhere, too – or, even better, owning it ourselves, exploring all kinds of waters. With these fantasies we not only strive to relive, but to augment what we felt when first watching the movie. And that is the point of the virtual photography pictures ↑I post to Instagram – gaming screenshots recreating the ambience and atmosphere I felt when watching a certain movie, reading a book, looking at a picture, or playing a computer game. The above picture is one of my takes on “Wet Nellie” – aficionados will recognize the number plate. In the spectacles of a gentleman—who is sporting a quite ↵distinctive tie knot, by the way—two people fighting are reflected. Who are they?
Simply leave a comment with your educated guess—you can ask for additional hints, too. [Leaving a comment is easy; just click the ‘Leave a reply’ at the end of the post and fill in the form. If it’s the first time you post a comment, it will be held for moderation. But I am constantly checking, and once I’ve approved a comment, your next ones won’t be held, but published immediately by the system.] A warplane in camouflage flies over snowy mountains. But who is inside? What I am asking for are the names of the two leading actors … identifying from which movie the screencap stems helps, naturally ;)
Simply leave a comment with your educated guess—you can ask for additional hints, too. [Leaving a comment is easy; just click the ‘Leave a reply’ at the end of the post and fill in the form. If it’s the first time you post a comment, it will be held for moderation. But I am constantly checking, and once I’ve approved a comment, your next ones won’t be held, but published immediately by the system.]

UPDATE and solution (17 March 2019): I do apologize for the substantial delay! Already on 11 January 2019 kyperpunk solved the riddle: Inside the plane are Richard Burton and Clint Eastwood. The screencaps stem from the opening scenes of ‘↑Where Eagles Dare‘ (Hutton 1968). Fun fact: The castle in the movie is Festung Hohenwerfen in Austria—the very same castle which served as the first inspiration for the ‘↵fictional castle atop Reichenbach Falls in ‘↑A Game of Shadows‘ (Ritchie 2011).

Just a collection of helpful resources for Quake Champions, created by members of the community:
The ↑Guide for Optimizing Fun in Quake Champions is a nicely done infographic pamphlet especially for those completely new to Quake games.
Going more in-depth all the numbers: health, armor, speeds, weapon damage, and, and, and … are collected in the spreadsheet ↑Quake Champions—Quick Info.
For information on improving and ensuring the technical performance of Quake Champions, Mike Martin’s ↑Gaming Guide for Quake Champions is the place to go. Beyond the technicalities there’s a lot more useful information on how to play Quake.
Ever wondered what settings, mouse sensitivity and so on the professional Quake players use? This ↑spreadsheet has a ton of progamer settings for Quake Champions. If that’s not yet enough, the ↑Graphical FOV Converter and ↑Universal Esports Sensitivity Calculator are two tools to help you out. Not to forget the Quake Champions Mouse Settings Guide. A crouchsliding tutorial with keypresses visible, slow motion, freeze frames, and explanation in voiceover. The tutorial aims at conveying an understanding of the basic principles, and suggests ways to start. Step-by-step instructions are given, and quite some opportunities of where to practice the techniques are shown.

From Megahealth to Heavy Armor in a second or so, and more exploits of the strange qualities of the pots combined with Ranger’s Dire Orb. Going out of map and back, into closed areas, and instant teleports across whole maps.

Bridge to Rail is just one of the jumps in Quake Champions Anarki can do with a circlejump only. As there were quite some remarks towards that after the last video, here is a small collection of Anarki’s circlejumps – forward and backward, naturally.

Description by RT Documentaries: ““La Sape” is a unique movement based in Congo that unites fashion-conscious men who are ready to splurge money they don’t really have on designer clothes. Dressing in stark contrast with their surroundings, these elegant ambiance-makers become true local celebrities… but this fame comes at a price.

The Republic of the Congo in Central Africa can’t boast of high standards of living. Yet, there are men here who are prepared to spend a fortune on designer suits. They call themselves “sapeurs” – members of the “La Sape” movement. “La Sape” comes from French and stands for “The Society of Ambiance-Makers and Elegant People”. For its adherents, it’s all about style and elegance, the right combination of colours and textures, brand-names and the highest quality materials. They derive true joy from showing off their attire on the streets of Brazzaville – the country’s capital and the centre of the “La Sape” movement. Walking down dusty streets lined with clay houses, they turn heads and feel like kings. And there’s no price they won’t pay for this.

In fact, behind the image of success these dandies project, there are often stories of significant financial troubles caused by their extravagant hobby. To afford the price tag of their designer clothes, “sapeurs” have to save, borrow and even steal money, sometimes bringing ruin to their families. But even the grim consequences of their indulgent dressing habits often don’t stop “sapeurs” from spending money they don’t really have. They are in constant competition with each other and investing in their image is more important to them than improving their living conditions. Dressing smartly becomes a true addiction that is very hard to conquer.

However, some “sapeurs” do strive to find a balance between looking chic and being reasonable with their spending. They insist that the “La Sape” movement isn’t about designer suits but rather developing impeccable taste. They make an emphasis on learning to dress well but within one’s means. This way, style and elegance will demand fewer sacrifices from their devotees and will be accessible to more sophisticated men.”

The Bridge to Rail jump done backward and forward with all champions, without using their respective special abilities. Plus a tutorial on how to do it – with keypresses and speed visible, slow motion, and an explanation of the circlejump and strafejumping. In between a little reminiscence of Bridge to Rail in Quake Live and Quake 3 Arena.